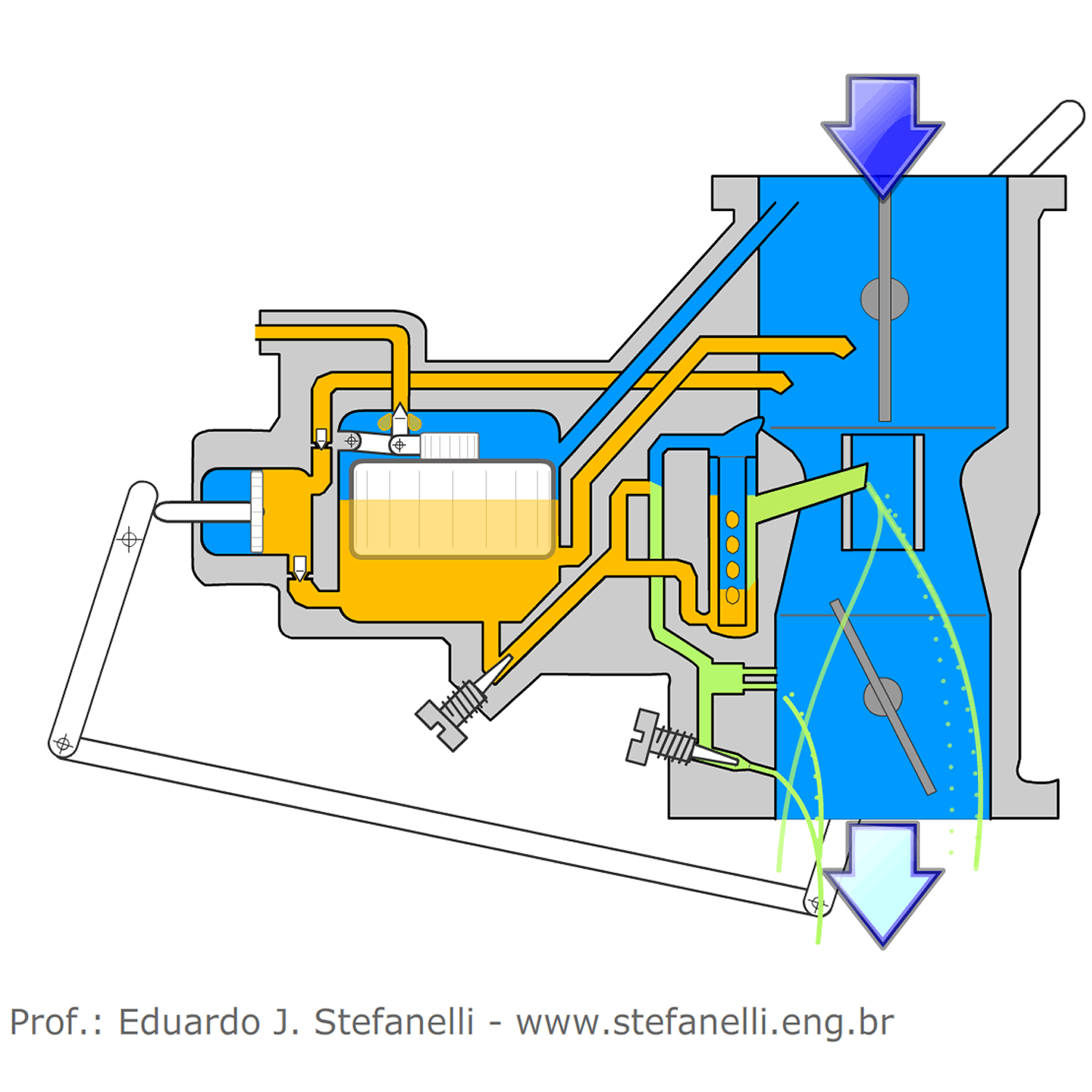 To start the process, an external force is applied to the engine crankshaft forcing their first turns, with open intake valve, the descending of the piston produces a vacuum within the cylinder. The external pressure ‘pushes’ the air from the atmosphere to occupy this space, this air passes through a filter system by the carburator and the intake manifold before entering the cylinder.

The air passes through the carburetor and ‘drags’ the fuel, gasoline or alcohol, for example, into the cylinder. The air-fuel mixture is compressed, an electric spark ignites the fuel-blasting-blasting-rapid combination of the fuel with the oxygen of the air yielding energy to the medium-producing expansion of the gases -increase of pressure and temperature. The explosion ‘blows’ the piston, providing power that builds up in the inertia of the crankshaft / flywheel assembly, causing the engine to continue spinning, sucking more air and reproducing the process.

The accelerator controls the rotation of the so-called ‘throttle’, which is a cap that revolves around its axis, making it easier or more restrictive (by changing the mouth area of the carburetor when opening or closing) and controls the volume of air which passes through the carburettor-vacuum.

During the opening of the throttle complementary systems are responsible for enriching the air-fuel mixture by injecting more fuel, generating a more aggressive explosion which pushes the cylinder harder it becomes -Part speed-increasing the speed of the crankshaft -RPM rotates (Rotation Per Minute) or min¹.

Increasing the RPM increases the speed at which the vacuum is generated which sucks -depressão air- and further increases the speed with which air passes through the carburetor, dragging more fuel to occupy this volume. This process continues until the flow in the carburetor is maximum, depending on the area released by the butterfly, the rate at which air is admitted and the temperature and pressure of the air -mass air, stabilizing the rotating speed of the crankshaft -RPM, until the butterfly back to move.

When the butterfly movement is in the direction of closing the air intake by reducing the area of the carburetor’s mouth and creating a constriction for the flow, the inertia of the crankshaft assembly / wheel tends to maintain its speed of rotation -RPM- finds, but , vacuum is formed at the ‘bottom’ of the throttle plate, which together with the friction of the moving parts slows the engine at a time a little outdated (desacelete quickly and see that the engine takes a while to reduce RPM) .