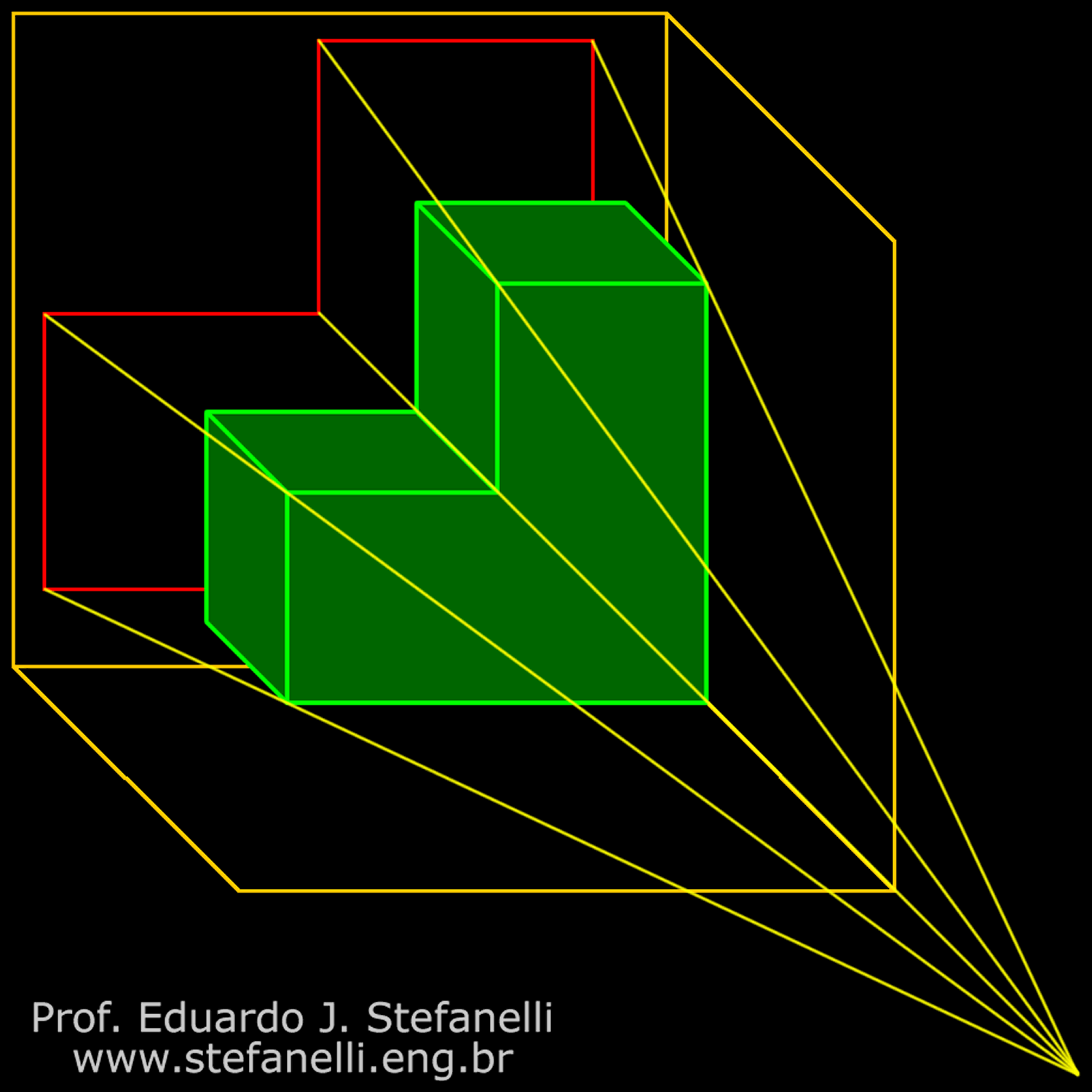 Projection: is the act or effect to throw something away;

Cylinder: is a round and a long object, with the same diameter over the entire length;

Three-dimensional: it is something that has three dimensions: length, width and height (or thickness);

Dihedral: is formed by the meeting of two planes;

Perpendicular: it is geometric entity that forms a right angle (90 degrees) with another;

Projecting line: Straight original projection center, through a point of the object to be represented. Its intersection with the projection plane gives image of that object point (ISO 10209-2: 2005);

Projection plane: plane on which the object is designed to obtain the representation of the object (ISO 10209-2: 2005);

Orthogonal projection: parallel projection in which all the projetantes intersect the projection plane at right angles (ISO 10209-2: 2005);

or continue rolling the page to understand the step by step.

This was the first educational program by Professor Eduardo J. Stefanelli, in 1992. He was developed and was presented with the aid of the AutoCad program. Since then, with the collaboration of students, it was converted into various media.

From the home screen animation ‘Projection Orthogonal’ you can choose the continuous or interactive presentation. Presentation ‘interactive’ requires you to right-click on the screen -or control- to advance. There are also controls that let you pause, forward or backward frame by frame or a group of frames.

On this screen, we present a prospective geometry object that will serve as a reference for the orthogonal projections.

Despite being on the screen background, he is a three-dimensional object.

Following a plan is presented positioned horizontally, called the Horizontal Plan, it divides the space into two regions called subspace, one is the upper subspace and the other is the lower.

Tip: this screen or presentation hover over the horizontal plane.

A plane perpendicular to the Horizontal Plane – the Vertical Plane – is added, it also divides the space into two regions: the anterior and the posterior. These two planes have a line in common, the so-called ‘Earth Line’, and together they divide the space into four regions, which are named as the quadrants of a circle or the Cartesian plane. Tip: Click on this image (or the control) and explore it with the mouse (pass it on the Earth Line, for example).

These two plans have a common thread, the so-called ‘Land Line’, and together they divide the space into four regions, which are named as the quadrants of a circle or the Cartesian plane.

Tip: Click on this image (or control) and to explore with the mouse (pass it on Earth Line, for example).

To this system of plans was added a third plane, perpendicular to the others, the ‘Profile Plane’. (Hint: explore the figure with your mouse and see that the regions are named as I, II, III and IV, (in the same order as the Cartesian plane),

The subspace I is delimited by the semi-planes Upper Vertical (s.v.) and Anterior Horizontal (a.h.), it is known as ‘first dihedral’;

The subspace II is formed by the semi-planes: Vertical Superior (s.v.) and Horizontal Later (p.h.), it is known as ‘second dihedral’;

The subspace III is formed by the semi-planes: Vertical Bottom (i.v.) and Horizontal Posterior (p.h.), it is known as ‘third dihedral’ and

The subspace IV is formed by the semi-planes: Vertical Bottom (i.v.) and Anterior Horizontal (a.h.); It is the ‘dihedral room’.

(Hint: explore this figure with the mouse).

Explore the next image again with the mouse. Hover over Roman numerals. Tip: all events with the mouse also happens in the animation ‘Orthogonal Projection