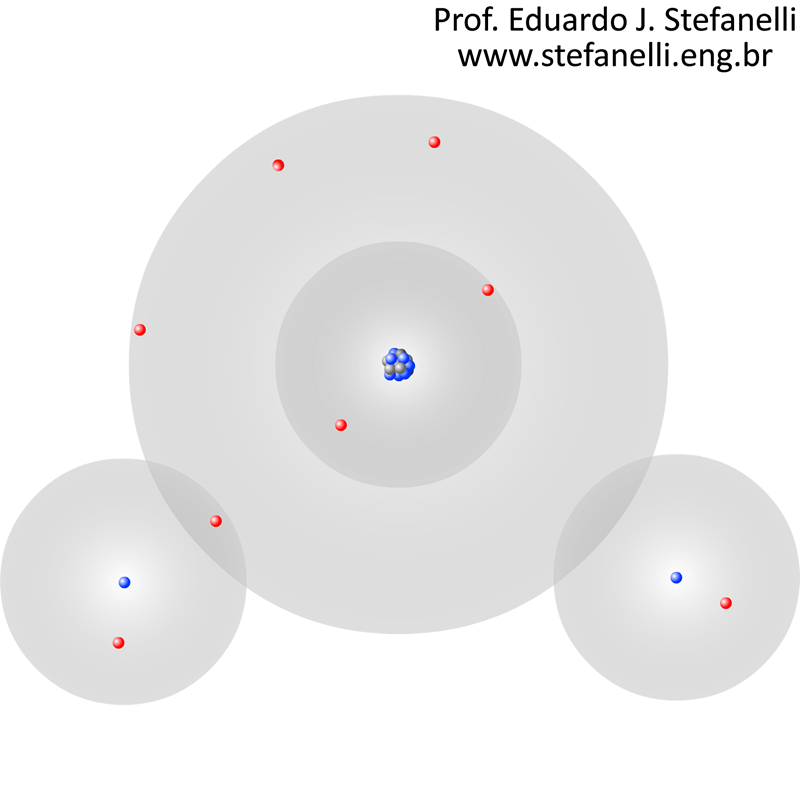 Colorless, odorless and tasteless, water is one of the most important elements for all known life forms. About 70% of the human body’s weight is composed of this molecule. It can be obtained by ingestion of liquids, food or by the combustion of food, as this reaction releases: water, carbon dioxide and energy. In nature, water can be obtained by a chemical reaction that occurs in a spontaneous and slow process.

This is the reaction for obtaining water in the vapor state:

and the water is obtained in solid form:

The water molecule is composed of one oxygen atom and two hydrogen atoms:

Symbol ‘O’ this element is found in the family 16 or VIA of the periodic table, has atomic number 8, with 8 electrons, 8 neutrons and 8 protons and atomic mass 16U, its electrons are distributed in 2 -camadas levels K and L 2 electrons in the K layer and 6 electrons in the L-tier layer of Valencia-, it is a non-metal. Its features in its molecular form and O2 at room temperature: it is a colorless, tasteless, odorless, oxidizer, and fuel is not slightly soluble in water.

most abundant chemical element in the universe, symbol ‘M’ belongs to family Family-1 or IA of the alkali metals, is present in this family by one electron in VALENCIA- layer, even if very abundant, naturally exists in small amounts in its molecular form.

It features 1 proton in its nucleus and one electron in its single level -K- has sui generis characteristics, because it is a non-metal. At room temperature is a diatomic gas (this means that it is combined with another hydrogen atom – H2) is flammable, colorless, odorless, tasteless, non-toxic -contudo asfixia-, is non-corrosive -but is highly reativo- and insoluble in water.

This element is considered the foundation of the economy of the future as it is the main fuel of ‘Fuel Cell‘ which is a system that leverages the power released in the combination of hydrogen with oxygen to move cars, for example.

The water molecule is angled, this means that the hydrogens attached to oxygen is always forming the same angle is 104.45 °. In this case the oxygen has two orbital filled with non-bonding electrons (in pairs) and a repulsion force between the electrons can cause a drift and allow the bonding electrons (which are not in pairs) to bind to hydrogen atoms forming this angle .

Water is a universal solvent, other substances with polar molecules are water soluble, while the apolar are insoluble -for example water and oil, the oil is part of nonpolar molecule therefore does not mix with water. When one wash greasy dishware use a detergent that will engage and emulsify the fat molecule and cause the water interacts with the polar part of the molecule and then drag the dirt.

In our body chemical reactions occur in the presence of water. In preparing a solution such as sodium hydroxide -soda cáustica- use water as solvent. Weigh a mass of solute (sodium hydroxide) and dissolve in water in a beaker, completed to the desired volume to establish a concentration, we can make it more concentrated or more diluted. Recalling that the bases (hydroxides) having in one molecule one or IA family are water soluble cation and two or II family has exceptions as in the case of calcium hydroxide (Ca (OH) 2) -quicklime partially hidratada- soluble.